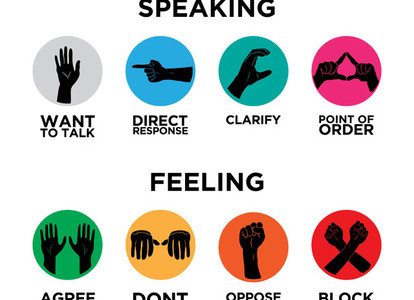 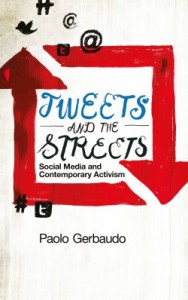 Cover of Paul Gerbaudo’s Tweets and the Streets

“Claims about ‘horizontalism’ and the use of terms such as ‘leaderlessness’ to describe the nature of contemporary revolutionary politics…are” declares Paolo Gerbaudo in a recent posting entitled Roots of the Coup, “..empirically flawed”. But are we ready for such a definitive conclusion?

In a public discussion at the LSE in 2012 with Manuel Castells, the journalist Paul Mason recalled that in 1945 the British Labour party leader, on winning the general election declared  “we are the masters now”, and reflects on how a similar sentiment would be unimaginable today. Castells continues “It just happens that people don’t want more masters. And that is both very complicated but is very interesting”.

However Mason challenges Castells : “Mandela DID, Martin Luther King DID working with hierarchical movements, working with a goal, a program and a leadership. Why do we worship the spontaneity of the network protest?” “Because” replies Castells “people don’t trust leaders anymore.”

These visions of newly emergent forms of governance developed through networked horizontalism and their manifestation in Occupy’s General Assemblies and their repertoire of dialogical methods and cooperative technologies, are one of the primary targets of Paolo Gerbaudo’s research. And, whatever its flaws, the range of the rich and illuminating narratives he draws upon, makes Tweets and the Streets -Social Media and Contemporary Activism (2012), a book that deserves a readership well beyond both the academic and the activist communities.

Gerbaudo’s extensive commentary is founded principally on the research carried out in 2011 for Tweets and the Streets and whose authority is founded on extensive ethnographic fieldwork, in which he assembled extracts of 80 interviews drawn from the three of the primary locations in the ‘year of protest’. Beginning with Egyptian uprising moving on to the ‘indignados’ of Spain and on to the Occupy movement in the US, with a detailed account of what he calls the “tortuous interaction between online communication and on-the-ground organising which characterized the emergence of this movement.” It is the subtlety of analysis and situated granularity that gives the book and subsequent essays the authority to support controversial conclusions.

Paul Gerbaudo, a lecturer at Kings College London, is one of the new generation of scholar/activists who place a combination of academic research and journalism in the service of the new social movements. Since Tweets and the Streets - he has departed somewhat from the familiar activist/scholar script, risking unpopularity by adopting the role of “critical friend” and questioning some of the highly influential narratives of these movements particularly the influential theme of ‘networked horiszontalism’. This is a tricky position because access to trusted sources for the activist/scholar are paramount and in the post Prism era of mass surveillance when trust is at an increasing premium.

The fact that Gerbaudo is himself an activist and no ‘innocent bystander’ means that he allows us to see the movements from the inside. This gives his scepticism authority and insight that is lacking from the better known critiques by the likes of Malcolm Gladwell and Evgeny Morozov. More importantly the depth of his investigations have It has also lead him to evolve a language that may enable others to deploy Gerbaudo’s own language to move beyond his own skeptical conclusions. He has given us possibilities to re-think approaches to collective governance based on more distributed forms of “soft” or “liquid leadership” with methods of coordinated action drawn from the arts such as “choreography”.

Although he has stated that primary intended public are the activists of the movement itself his book deserves a far wider readership. The reason for this he approaches the occupations as gigantic experiments.Experiments in what might be possible if ‘business as usual’ were to be suspended. And the value of Gerbaudo’s work is that rather than simply listening to what people said about what they were doing his fieldwork enables him to compare what people said with what was actually happening on the ground. It should be clear that even though there is a gulf, this in no way diminishes the importance of the movement. On the contrary the willingness of participants to risk genuine collective social experimentation is one of Occupy’s lasting legacies and the guarentee of reemergence in new forms and contexts. Gerbaudo’s contribution is to ensure that we can look at the results of the experiment rather than rhetoric alone.

Rather than treat the occupations as definitive utopian arrangements he examine and contrasts three very differently situated experiments in ‘lived’ democracy. And as with all true experimentation outcomes frequently fail to match original propositions. Gerbaudo’s contribution is to not merely to confront the contradiction but also to begin to forge a new set of conceptual tools with which to steer a new course. He this succeeds in eschewing the role of activist/celebrant and render the riskier but more substantial service of activist/researcher. In the process he forges fresh and unpredictable conclusions along with a highly suggestive language of new forms of mobilisation and governance based on a language of choreograph, the choreography of assembly.

We can surmise that the expressive dimension of terms like choreography illuminate the fact that observers on all sides have seriously underestimated the importance of emotions, the libidinous dimension of protest. At a seminar at MIT Gerbaudo describes these forms of leadership as operating through a form of “emotional harvesting”, utilising social media as the “emotional conduits” providing “these sentiments a political teleogy”.

Beyond questions of organization and leadership another of Gerbaudo’s major conclusions is perhaps more optimistic. And that is what he has called the “majoritarian turn”. Unlike many activist sympathisers rather than condemn the widespread use of Twitter and FaceBook and the use of other popular corporate social media platforms. Rather he sees their use or rather their ‘occupation’ as exemplifying a phase shift from anti Globalisation movement with their autonomus platforms such as Indymedia as signifying a movement based tribal coalitions difference and identity in contrast to the arrival of a new majoritariansim. The protestations of normality with which the Indignatio manifesto begins through to the iconic “We are the 99 per cent”.

In Britain this has become even more evident through the recent high visibility of Russel Brand’s “monstering” of the iconic so called grand inquistor Jeremy Paxman revealing the complicit nature of mainstream media discourse. Big-mouth Brand deployed his high voltage personality and rhetorical gifts to good effect. In recent essay Gerbaudo has dubbed this majoritarian turn “anarcho/populism”.

As the “Arab Spring” turns to “winter” there has been a hardening of tone in some of Gerbaudo’s key positions particularly on the question of horizontalism in leadership. This is most clearly evident in a recent posting  “The Roots of the Coup”. Although the bulk of the posting provides important insights into the importance of the many sub-cultures that constitute the Egyptian protest movement he concludes by using the coup as evidence to consolidate his critique of contemporary beliefs in the democratic potential and efficacy on horizontal organization. From an original position of skeptical sympathy he appears to have moved towards outright denunciation.

“Claims about ‘horizontalism’ and the use of terms such as ‘leaderlessness’ to describe the nature of contemporary revolutionary politics – such as reasserted by Paul Mason in the last issue of Soundings – are blatantly empirically flawed, given that activist elites continue to exist in contemporary movements, regardless of their use of social network sites. Moreover, this type of neo-anarchist discourse, very popular among activists themselves, tends to favor a nihilist attitude that sees formal organisations and the state as invariably evil and ‘inauthentic’, and thus leaves no room for imagining the new forms of organisation and institution that are urgently needed to fulfill people’s hopes for systemic social change.

declarations of horizontality within social movements, a highly irreverent protest culture and a reluctance to construct a credible political opposition leadership have combined together to produce a popular appeal for the paternalistic intervention of the army – a deus ex machina, a state above the state, called on to sort out militarily what civil forces could not sort out by themselves politically…”

I would argue that it is a failure of nerve to draw such totalizing and drastic conclusions. The hunger for more inclusive democratic processes that resist cybernetic command and control persists and will not disappear. The modes of decision making developed through Occupy’s General Assemblies were not, and did not pretend to be a definitive. They are an expression of what Roberto Unger has charaterised as “high energy democracy,” and will remain works in progress. What they are not is a distraction from the ‘real work’. They are a vital experimental process and a glimpse of what a more actualised democracy might look like.

Gerbaudo underestimates his fellow activists who, in the best cases, do not delude themselves about the enormity of the task in freeing ourselves. The clues of what the new forms might look like and how new thinking is changing the nature of leadership is present in his own writing, in his articulation of the complementarities between public space and social media as a “choreography of assembly”, drawing on the etymology of the word choreography as a “writing of movements”. This ‘style’ of mobilization is part of a process “of symbolic scene setting and scripting of the way in which people come together”.

To return to Castells at the end of his conversation with Mason, he makes a plea for the importance of patience “It took 20-30 years from the arrival of mass industrialization to the point when the union power and the labor movement became part of political institutions”[…]. “It is a long journey from the minds of people to the institutions of society.”

People may not want masters or hierarchies but for now the established concentrations of wealth and power seem to remain impervious to change. This lack of progress leads us to continuously return to the same question: how do we organize democratic governance differently in a digital age? There is no teleogical guarantee of progressive outcomes. Neither will progress be the outcome of neatly implemented strategies. It will be hit and miss, trial and error. Install, update, crash, restart, de-install, is a version of Becket’s dictum for the age of mass-self mediation “Fail, fail again, fail better”.