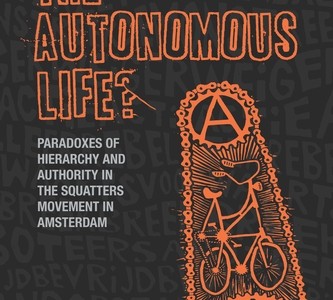 An interesting anthropological study has been recently published. The Autonomous Life: Paradoxes of Hierarchy and Authority in the Squatters Movement in Amsterdam, by urban anthropologist Nazima Kadir. Highly organised squatting had a long tradition of squatting in the Netherlands facilitated by a specific law brought in in 1971 that in effect meant that the police could not evict squatters without going through many legal hoops. This fact became a catalyst for a powerful movement of radical pragmatism. A great deal of a radical left youth culture was encapsulated in the housing issue and various forms of idealistic lifestyles were explored through this lens of housing. A house was more than a home it was a locus of (principally anarchist) ideology.

I encountered the movement not through squatting but through their Pirate TV , radio and publishing which I admired and many well know media activists and theorists from the Netherlands have close connections or roots in the squatting movement. The book is full of interesting and close up analysis of the movement along with some useful history. Some of the analysis of paradoxes of living out idealistic lives while hierarchies, conformity and disguised forms of leadership are both interesting but also shallow and have been investigated with greater originality and insight by Paolo Gerbaudo in Tweets on the Street. But the details of the case studies and the embedded position of the author certainly adds a great deal of new empirical data from which to draw our own conclusions.

Below I have transcribed this interview with Kadir from “Thinking Aloud” a BBC Social Science radio program. Its an interesting snapshot but a bit shallow. The book carries some of the same limitations but is rich in narrative detail and allows us to draw more subtle conclusions.. Far better on the challenges of decision making and disguised forms of leadership in so called leadership movements is Paolo Gerbaudo in Tweets on the Streets.

Laurie Taylor- How would you characterise the movement? As a life-style or a political movement?

Essentially I lived in four different squats over a period of two years. It was an amazing experience. It shaped the person I am. But prior to the period of living as a squatter I spent a year doing interviews and spent a few months as a cook in a squatted restaurant that’s where I got to know a lot of people. And due to personal circumstances I found myself without housing and I had lot of squatter friends who invited me to live with them.

LT- You describe a great many ambiguities into the way the people who live in these squats behave I mean one features that you capture well is the concept of authority and authority figures and how that is dealt with by the squatters. Can you elaborate?

NK- To be very clear this is an anarchist social movement. And the ideology is against hierarchy and against authority. But it was also a complicated social movement that was under a lot of stress. And requires a tremendous amount of organisation. And so in order to be considered a “good and real squatter” there are a bunch of different types of skills and performances that one must inhabit and demonstrate. To be an authority figure in particular means that you have to be recognised as a “good squatter”. You have to be good at particular things like “campaigning” being able to deal with politicians around legalistic issues. As well as being a very aggressive and outspoken public speaker. Although no one calls these authority figures the boss.

NK – yes you need a variety of practical skills and many also require skills that draw on education and competence.

LT- They sound like class attributes requiring a certain level of education. What about class and education in the community? How is this handled?

NK – Authority figures allows people to feel excited by them, and have confidence in them and must believe in them. But at the same time in this community there is a very strong ideology of equality and although people come from all kinds of backgrounds in the movement every one is supposed to be equal. And so there is a taboo against using education or status as a hierarchical tool. However habitus of authority is to a degree unconscious it is something we recognise without ever talking about it.

LT – there is a whole range of typologies you talk about the wild squatters, the crusty punks, the baby punks, the student squatters ?

A “crusty punk” is bodily really dirty.. is someone who doesn’t care about anything but is really good at rioting!.

A student squatter is someone who looks like a “normal person” but is actually a squatter who is squatting out of political conviction. But the assumption is that they are transient. They will not be in the movement long term but will be really good while they are in it.

LT s-o people who regard themselves as true squatters define themselves against these typologies that are somehow seen as inadequate or not proper squatters?

NK -More that the idea of having all these sub groups is a way of understanding what the ideology of whatever particular group that is. For example the group I spent a lot of time with in the book I call them “the campaigners” but they were referred to disparagingly by the other groups as the “social democrats” and the worse thing that an anarchist can call you is a “social democrat”.

So essentially because its an oppositional identity the most dominant pose is that of this negative identification or negative classification which is the number one “other” is this idea of the “mainstream”.

And then there is a whole world of others.. the “press” is an “other” the “Yupies” are an “other”. And then within the movement there are also all these groups you are identifying yourself against. In this way you are constantly setting yourself up as authentic, whilst seeking recognition from other people that you yourself are authentic.

So moments of eviction.. moments of violence with police or with an owner.. those are the moments of ultimate performativity.. And there is literally a set of things that you are supposed to do in order to be a resistant as possible.

LT- were you there at a nostalgic time when there was a sense in which people were not squatting in the sense that it had been done before?

NK- In the historical research I did there was this constant refrain that in the past things were better.

LT- You are suggesting that there was a degree of conformity that is at odds with the ideals of autonomy and self realisation.. an opposition to the staus quo..

NK- I struggled with the fact that the idea in the community was that you were free from society but there were a great many norms and rules that you were meant to abide by and were often more strict than the society from which you were fleeing. A lot of the book looks into the ways in which individuals in the community were constantly seeking ways to accrue capital essentially gain the love and respect of their peers. Within both an individual house and the wider movement.