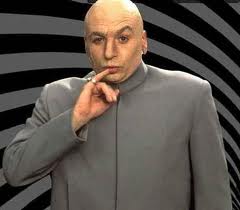 Beyond Dr. Evil- And the Curse of Zero Transactions Costs

“To me, it is somehow super clear that Facebook is evil. Not hard to

understand. But Google? Why are tensions rising so high lately around

them? Look at the tone of the Cory Doctorow blog post to Boing Boing?

Don’t get me wrong. But have they really gone down lately? In my

humble view they are as evil as were a decade ago… What happened?

Which company is currently in the spotlight as today’s designated Dr. Evil
is less important than the legitimate hostility and generalised anger at the
winner takes all economy of info capitalism that these companies collectively
represent. Its a political economy which has even departed from Adam Smith,
as the creation of monopolies is increasingly seen as a necessary condition
for survival in a world where transaction costs are near zero. In fact the
imposition of ‘temporary’ monopolies was even proposed by dreadful Larry
Summers as a last ditch policy to save capitalism in 2001 after the first
dotcom bubble burst. In the event he needn’t have bothered it happened
anyway.

The older heavy industries (even IBM) had to borrow heavily and issue equity
to invest in ways that drove productivity and relatively secure employment.
Today a company like Whatsapp (to take just one example) employs around 50
people and has a market value that is said to exceed Sony Corporation.. Once
they reach critical mass the new info-companies do not need to borrow to
invest. On the contrary, Smauglike, they sit on infinite piles of gold. The
money is just not circulating.

The hoarding vast piles of capital, the avoidance of tax, the employment
tiny numbers, whilst simultaneously disrupting (and shrinking)
established industries across the board is not an obvious recipe for
winning any popularity contests.

Off-list… I’m curious re: your statement that “the creation of monopolies
is increasingly seen as a necessary condition for survival in a world where
transaction costs are near zero”… I’m not seeing the logic… the lowering
of transaction costs should I would have thought lowered the market entry
costs and thus lowered the likelihood of the creation of monopolies rather
than the reverse (the creation of the monopolies I would think has more to
do with the reduction of communications and management at a distance cost…
which may, but wouldn’t usually be understood as “transaction costs”.  These
in turn are not really going to be part of any company’s survival strategy
so much as a market condition governing their overall behavior in the
marketplace but in that they are no different from any other player in those
markets.

Nor as it happens… the logic for this isn’t clear either “The older heavy
industries (even IBM) had to borrow heavily and issue equity to invest in
ways that drove productivity and relatively secure employment.” Certainly
they did this to drive productivity but to realize “relatively secure
employment”… perhaps this was bi-product but surely unintended given IBM’s
employment policies over the last 20 years or so…

My argument based on extrapolating from the proposition that near
Zero transaction costs in the digital domain is the cause of the
Infinite abundance that is “tanking the price of everything”. And that the
Only (capitalist) solution to the resulting pricing crisis is extreme
Market dominance. This argument is base on a definition of transaction costs
as the costs ofproducing extra units of any commodity once the fixed costs
are covered. So in the case of the case of an digitally networked
informational commodity once the transactional costs are reduced to zero or
near zero we arrive at that principle game changer of the digital domain; the
absence of scarcity.

The unintended consequence of this absence is the disruption of
thetraditional pricing mechanisms on which markets and profits depend. There
are two ways to deal with this threat and both of these depend on
Near monopolistic scale- 1) is to be in a position to challenge the principle
Of net neutrality on which the transformational power of the net depends-
This is happening as many companies are seeking to challenge net-neutrality
And reinstitute pricing mechanisms. 2) Also only available to those who
Have reached critical mass, is to keep things ‘free’ but to aggregate
Networks and leverage the resulting massive scale on which their data mining
+long-tail advertising business models depend. To go down these routs
(particularly the last one) makes dominant or total (winner takes all)market
share far more urgent than with other types of commodity.

This is why the tech upsurge has a far greater tendency to create monopolies
than the heavy industry era . Three or four Googles or Facebooks doesn’t make
sense but there are 4 big global accountancy firms and goodness knows how
many big carmakers . Sure they compete but they are quite able to divide the
world between them without feeling any existential threat. In terms of your
second objection I am not inclined to agree that the creation of the mass
employment was simply the bi-product of the era of heavy industry. Many
captains of industry (if reflectively inclined) believed, and at the time it
was true, that the continued success of their individual industries and the
economy as a whole depended on the masses who made commodities also being
able to buy those same commodities.

And the current erosion of this model is exercising economists and policy
makers across the the narrow spectrum of mainstream politics. How to deal
with what Larry Summers calls “secular stagnation” an era in which wage
stagnation, the precarious free-lance economy increasingly means that people
can’t afford to buy the stuff that is being produced. The last solution was
the debt fuelled boom that preceded the crash. So now what? China?