Warhol’s most famous aphorism could easily morph into – “In the future everyone will have a job for 15 minutes”.

Although he never once utters the words Creative Industries, the art critic and theorist Thierry de Duve’s wonderful little book, Sewn in the Sweatshops of Marx, does much to refresh our thinking on how the powerful contemporary myth of creativity is deployed to mediate and soften the new production processes that dominate the post-industrial political economy. Although the book’s overt subject is the work of four legendary modern artists, Beuys, Warhol, Klein and Duchamp, what gives these essays relevance, is that he examines the work and lives of theses artists through the lens of the political economy.

All four essays are of interest but it is the first two chapters (juxtaposing the art and personalities of Beuys and Warhol) which generate the most important insights through exploring the dialectical relationship between the incommensurable values of these two artists. From the friction between the two radically differing narratives we can extrapolate the key contradictions and paradoxes that constitute the core propositions of the Creative industries; universal creative participation through user generated content and the perpetual stimulation of desire and commerce. 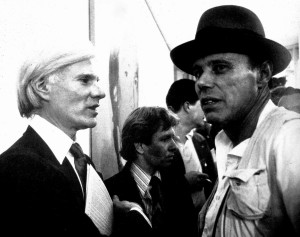 Beuys, the last truly great exponent of the romantic movement, an artist for whom creativity was the potential that resided in each and every one of us. It lead to his twin proposition that not only was everyone was an artist but also that art is not a profession. For Beuys “capitalism remained the cultural horizon to leave behind…Beuys based his art on will and thus on the principal of production, Warhol based art on desire and thus the principle of consumption;…This was deeply prescient anticipating the core shift in power relations that was taking place ”where the figure of the consumer takes center stage alongside (or even instead of) the worker, or better where these two figures are merged. Hardt and Negri thus speak of “affective labor,”

Beuys believed in creativity and Warhol did not…for Beuys art was labor while for Warhol it was commerce. But despite the apparent gulf between these two artists something separates these two artists from the Creative Industries and it is not simply capitalism. After all  the very essence of Warhol’s work is to ignore use value and exclusively instantiate exchange value. What separates Warhol and Beuys from the denizens of the Creative Industries to come was that they both (in radically different ways) inhabited what Duve describes as a 19th century invention, the mythical country of bohemia.

Duve describes a country peopled where flaneurs and dandies cross paths with peddlers and rag pickers; and the only one radically denied a visa is the bourgoeois..Dickens and Zola have described this dark fringe of industrialization, these shady interstices of urbanization. ..(also Baudelaire and Hugo) they drew inspiration from this marginal society but also contributed to the fabrication of its image. .. Daumier, Degas, Toulouse Lautrec the Picasso of the Blue and Rose period… To this gallery of portraits Beuys adds his own…” And so does Warhol But the inhabitants of Warhol’s version of bohemia, the denizens of the Factory have no access to the 19th centurie’s most powerful invention, the weapon of solidarity. encapsulated by Marx’s conception of the prolatarian class “as united through their labor power as individuals both belonging to the exploited alienated class and carrying the emancipated destiny of species.”

As Duve points out Warhol’s superstars are all isolated individuals. “Their were no social types in Warhol’s bohemia, no acrobats or ragpickers, but rather proper names: Edie Sedgwick, Gerard Malanga, Ron Tavel, Brigid Polk, Candy Darling, Viva, Ondine, Billy Name … each with his or her quirks, neurosis, sexual speciality, and idiom.”. In the end they are victims. Victims of Warhol’s exploitative regime, and the means by which this was achieved points towards the future of a creative economy based on mass self-exploitation of affective labor.