The involvement of art in activist movements is highly contested. Particularly at a point when a veritable industry exists of politically engaged art in museums and academies around the world. One of the few shows I have seen to address this terrain in a way that takes us into new and more generative territory is the exhibition, Disobedient Objects currently to be seen at London’s Victoria and Albert Museum.

Disobedient Objects is a history of late 20th and 21st century protest movements told through ‘objects’, the tools of direct action, communication and resistance. In the words of the curators it opens up the question of material culture the previously under examined area of the art and design of object making within social movements. 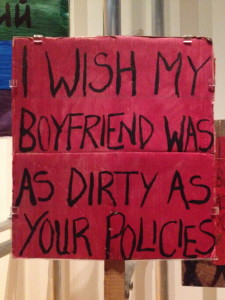 The very fact of exhibiting in a place called Victoria & Albert Museum was not lost on the curators and their texts show they were aware of the risk of the Faustian Pact into which they had entered. It was clear that they realised they could not themselves escape being problematically recuperated. But they clearly decided it was a risk worth taking. And they were right!

Against all the odds, they have managed to pull off an unlikely popular and critical success. The show is crowded with visitors whilst also garnering near universal critical acclaim and thoughtful commentary. 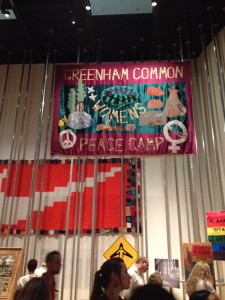 The show has also been successful in the less obvious ways. The V&A is not a primarily a Fine Art museum (its emphasis is on the decorative and applied arts) so the curators could, to a degree, avoid the well rehearsed games of legitimization required to transform objects into conceptual or financial commodities.

Another less visible layer of achievement has been the organizer’s willingness to engage in complex deliberations with activist participants and to make these discussions (in part) available for scrutiny in the catalogue. Making this effort allows us to reflect on the fault-line dividing militant activist desire and the communicative and the institutional imperatives of a major public museum.

The only clear failure to my mind is the price of the catalogue/reader which at £20 (or even more annoyingly £19.99) is far too pricey and likely to exclude those who have the most at stake in a show like this. Its not a question of bad faith on the part of the organizers. The publication is beautifully made and must have been costly to produce. Though not extortionate its just too expensive.

This fault not withstanding, the book is really is a good piece of work, achieving everything an exhibition catalogue should. It illuminates the conceptual and design logic helping the visitor navigate a complex and crowded show. It is unusual in revealing some of the contentious discussions with different constituencies leading up to the show. And its full of sharply written, well illustrated, essays by highly respected scholar/activists who are not afraid to journey into weirdly idiosyncratic lines of inquiry. One of my favorites being to pose the urgent question “why do cops hate giant puppets?”“why do cops hate giant puppets?”.

The design of the show remains true to the ad hoc spirit of protest and civil disobedience, making no concessions to expectations that museum spaces should be for quiet reflection, it is a defiantly raucous jamboree in which the objects jostle alongside one another against the noisy backdrop of a video montaged history of protest and campaigns from the early 20th century until today. Most of the objects on display are disobedient in the obvious sense of having been forged in the expectation or actual heat of violent confrontation and civil disobedience and so carry visible traces of a rough-hewn character. 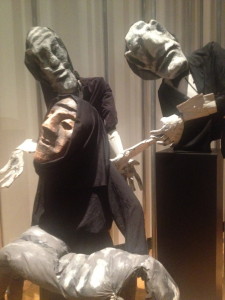 What could have been a chaotic and disorientating experience is mitigated by organizing the show spatially into four sections reflecting four strategies for social change: Direct Action, Speaking Out, Making Words and Solidarity. The sections were designed to act as anchors around which the objects gravitate, guiding and encouraging visitors to make their own connections.

The overwhelming aesthetic is one of ad hoc improvisation visible through devices such as the plastic water bottles transformed into gas-masks or the lock-on devices, the devices in which chains and metal tubes enable people attach themselves to each other.

Making an appearance opposite the paper mache puppets are the famous Book Block shields originating in the Italian student uprisings of 2010 and adopted around the world as a form of protection in which are enlarged images of book covers cover of books Oscar Wilde’s The Happy Prince, Thomas Paine’s Rights of Man obliging riot police are to attack Literature and Knowledge with truncheons.

Particularly striking is the Tiki Love Truck (the largest artifact in the show) a vehicle, covered in mustard yellow and orange ceramic tiles, on which sits, the death mask taken (illegally) of John Joe “Ash” Amador, who was executed in 2007. The death mask was taken in secret by his friend the campaigner Carrie Reichardt and her accomplice Nick Reynolds. 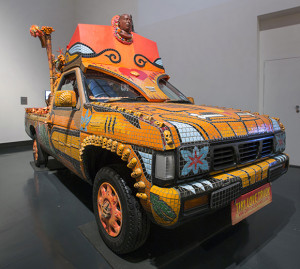 The Tiki love truck has become a familiar presence around the world at parades and at festivals such as Glastonbury where it is deployed as an instrument in their campaign against the death penalty. In an interview for Prospect magazine Carrie Reichardt explains how she uses the appearance of vehicle to engage people in discussion; establish a rapport, get them interested, then bring out the harder, scarier stuff. This work and the way in which it is used exemplifies the -deliberative turn- in the art of campaigning.

The love truck has become a familiar presence around the world at parades and at festivals such as Glastonbury where it is deployed as an instrument in their campaign against the death penalty. In an interview for Prospect magazine Carrie Reichardt explains how she uses the appearance of vehicle to engage people in discussion; establish a rapport, get them interested, then bring out the harder, scarier stuff. This work and the way in which it is used exemplifies the -deliberative turn- in the art of campaigning. 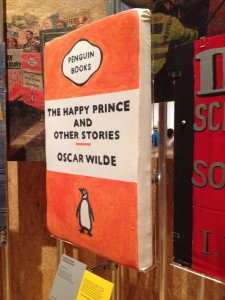 Acknowledged or not contemporary art contributed to the turn away from crude agitprop of earlier generations to a more intimate dialogical approach, a deliberative turn- whereby image or image and text combine to become invitations to discourse.

This development is particularly visible in the AIDS activist movements of the 80s as epidemic cut across all classes, including many in elite art and design community politicizing many for the first time and propelling a new dimension of media savvy professionalism onto the streets. It also reflected the critical post-modern art of the time borrowing from the likes of Barbara Kruger, Martha Rosler and Jenny Holzer, and deployed contemporary art’s capacity for a degree of abstraction which allows for information to be tactically withheld, creating new spaces for participation and dialogue. 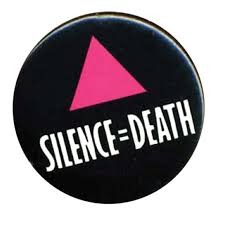 A key example in the exhibition are the Tee shirts sporting the famous ACT UP icon in which a bright pink triangle is set against a black background above the equation SILENCE=DEATH in an ominous Gill Sans Bold Extra Condensed, which anchors the whole composition as a piece of diabolical math- The icon became and remains the global logo of AIDS activism. I am probably exhibiting the worst kind of connoisseurship in confessing to a frisson of excitement at seeing for the first time in the show the original sketches leading up to the final version of this masterpiece, from Avram Finkelstein’spersonal archive.  In a discussion with writer Jesse Green in 2003 Finkelstein, one of the original members of the Gran Fury artists collective, felt the need to justify his professionalism, saying – ”If you have an art training or make art,” -you can’t escape the way you communicate. Everything is aesthetisized -. 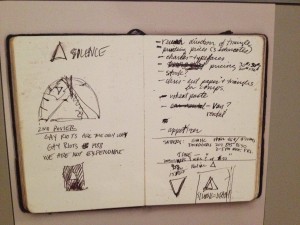 In the context of the exhibition as a whole this particular piece of work stands out as an exception to the overwhelmingly improvised,  DIY (and post-digital) ethos. The presence of an alternative aesthetic register points to an important and under explored dichotomy.

The general ethos of Disobedient Objects is what Williams and Srnicek, authors of the Accelerationist Manifesto, would refer to (disparagingly) as the folk politics of localism, direct action and relentless horizontalism, which they contrast to the –”accelerationist politics which is at ease with a modernity of abstraction, complexity, globality and technology.” If I were to imagine a next stage in the program of action and inquiry that this important exhibition has opened up, it would be aimed at rendering the accelerationist dichotomy redundant.