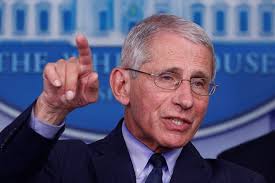 Dr. Anthony Fauci has become something of a hero in the US. And with good reason as he may be all that stands between Trump and catastrophe in the US.

But to see him standing next to Trump on the podium is to be reminded that in a former life he was also one of the primary targets for ACT UP the formidable AIDS grass roots campaigning group. Those attacks on Fauci culminated when 1500 activists marching to his office waving “Fuck You Fauci” banners and throwing smoke bombs.. Attacking the agency for denying patients access to clinical drug trials. For many activists he is still seen as a key culprit in delaying the roll out of PCP Prophylaxis back in the late eighties and early 90s.

This history was brought home to me vividly in a recent BBC radio profile on Fauci which featured HIV AIDS activist Peter Staley describing how the protests “put a fire under his feet”…” and seemed to do the trick as “within a few moths the executive committee of the AIDS clinical trials group met with Tony and they caved at that point”.. “So” claims Staley “it was that demonstration that broke the log jam.”

Staley pays Fauci a tribute, describing how  “unlike every other member of the US government he invited us to meet with him right away… he also had zero homophobia unlike all of our targets at the time”. Fauci not only listened he also changed his mind. But too late for many activists of whom a significant number to this day see him as complicit in many hundreds of unnecessary deaths.

But Staley tells another side of this story which explains why this activist counts Fauci as a friend. Its worth quoting his words in full

“During the worst AIDS years hundreds of dying gay men filled up nearly every hospital room at the National Institute for Health Clinical hospital and Tony Fauci was their physician. He lost hundreds and hundreds of patients. The amount of loss that he witnessed is extraordinary. And what I have come to know through my friendship with Tony is that the scars that I carry from the plague years are scars he carries to. I’ve cried with Tony and he is the man for this moment..”

Maybe Fauci learned something from the communicative genius of ACT UP as during the 2013 Ebola out break he went out of his way to dispel American fears by publicly hugging Nina Fam a US nurse infected after caring for a dying patient when she was considered free of the virus and discharged from hospital.

A well known English writer and activist put things in perspective for me recently when he warned that this was not “the moment to visit old battle fields unless there is something to be learned from them and applied to the current emergency”  adding that “our righteous anger about all those who died dreadful and largely avoidable deaths from PCP should not be used to undermine Dr Fauci’s potential role in saving lives in the COVID 19 scandal in the USA.”

So can anything be learned and applied from the plague years to the current emergency? Is it too early for activism and even rage ? What would COVID 19 activism even look like? One thing we learned was that Fauci was a scientist willing to listen to those outside of the hierarchies of power. It maybe that the kind of openness is more common in immunology that in other natural sciences making it an important outlier for the acceptance that expertise might be found anywhere. The implication of this conclusion is that if we are to prevent the fleet-footed populist demagogues from capitalising on the aftermath of the crisis with more lies, blame and gas-lighting we will need to begin by fundamentally recasting the relationship between the political class, experts and citizens.