In the book Pandora’s Hope, Bruno Latour suggests replacing the concept of science with research. This, he argues, would have the effect of rendering science less cold, less aloof and distant; less likely to act as if it were disconnected from the collective. This shift he asserts would result in something more uncertain and open ended; an alternative to “the purifying  practices that define modernity”. This year’s edition of the “Improving Reality” series of conferences, in Brighton, was an excellent demonstration of how Latour’s formula for science might equally be applied to art and provide a means by which we might at last move beyond the old SCI/ART narratives and cliches taking us to a point where the two domains are actually moving closer. Furthermore we can see how this convergence occurs in part through the progressive emergence of the relatively new category of artist/researcher, a broadly based movement aiding our escape from the ‘purifying processes’ of classical modernity, both inside and outside of the academy.

Lighthouse, Brighton’s digital cultures agency has established “Improving Reality” as a well respected annual international conference.  This year’s theme of “Visibility is a Trap” was well chosen for moment in which the world appears to be swerving between radically different regimes of visibility, from the horrors of video executions as a weapon of Jihadi fighters, waging asymmetric warfare with the West, through to Zuckerberg’s exploitation of an ideology of radical transparency right through to the ultimate in one way visibility; Snowden’s revelations of state sponsored mass surveillance. Probing multiple forms of compulsory visibility and developing alternative scenarios is a task embraced by the artists and thinkers who took part in this year’s successful and highly focused event.

The notion of visibility should not only be seen as visuality- The in this event concept of visibility was multi-modal with all the senses engaged above all the sonic. John Armitage’s presentation on the cel phone involved an ingenious inversion Mcluhanisms’s ” trope of “media as extensions of man” when applied to today’s telephony when it becomes, Armitage argues, “extenion of the state”, or what the artist Lawrence Abu Hamsen called in his performance/lecture the “long ear of the law”. Both of these examples point to the fact that this year’s event not only emphasises art in general but there is also a weighting towards the sonic arts in particular. Events of this sort frequently privilige the visual with, sound artists and performers are too often ghettoised or exceptionalised in this conference however, not only was the sonic as a modality and a discourse fully integrated it was also understood in the work of both Holly Herndon and Lawrence Abu Hamsen the sonic operates as gateways wider synesthetic modalities. 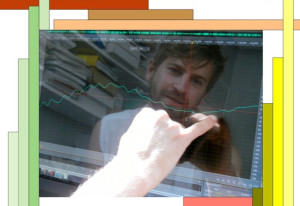 In this cluster of presentations Abu Hamden’s performance/lecture walked the riskiest tightrope and was thus ultimately the most rewarding. Like his 2012 documentary The Freedom of Speech Itself (2012) his lecture/performance for this event draws on the “application of forensic speech analysis, voiceprints and voice analysis developed for boarder agencies to determine the origins and authenticity of asylum-seekers’ accents”. In the case of this performance however he moves beyond the domestic juridcal context, deploying these resources to construct a poetic analysis of the hidden symbolism embedded in acts of pronunciation.

He delivers the performance/lecture holding a sampler like a reluctant indy musician’s guitar, and throughout the performance  he uses to capture and sample carefully articulated statements and arabic pronunciations. This has the effect of separating the sounds from the body, allowing each speech act to take on an objects-like status, which suggest unpredictable forms of agency.

As he performs, the video, running in parallel behind him situates the work in a wider political landscape by documenting of an enforced conversion of a Druze village by militants. They appear to be complying by reciting new prayers but Abu Hamden appears to be suggesting that in the very structure their pronunciations lie multiple space for subtle forms of resistance through dissembling  and slippage. Abu Hamden has used his earlier research into the way voice technology is being use by boarder agencies to “change the conditions of listening so that the speaker no longer knows who, or what technology, is being used to interpret their  voice”.

This was the first time I have seen this performance (I think it was a premier) in which it hard to grasp its multiple levels or whether indeed “grasping” was what was intended. But of one thing I am certain it requires (and richly deserves) many viewings.

To return to the theme of the collapsing public/private boundaries that was the key subtext of the conference. Its imanente collapse into a rubric called “love” was the theme of the Dutch design collective Metahaven’s video, City Rising (2014) whose atmospheric opening begins with the voiceover declaring that “Over the past few decades, it has often been said that we no longer have an addressee for our political demands. But that’s not true. We have each other. What we can no longer get from the state, the party, the union, the boss, we ask for from one another. And we provide.”

The spectre of the Snowden/prism revelations pushes question of individual privacy so far into the foreground that the legitimate and urgent desire to protect the individual private sphere is in danger of obscuring the need to see this question its relationship to the urgent task of re-imagining the public sphere.