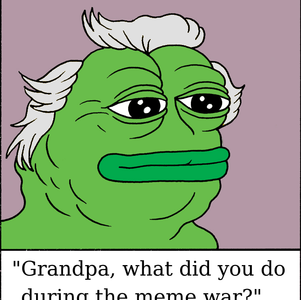 A lab on actions to overturn alt.right’s victory in the meme-wars.

Just over a month ago the writer and researcher Florian Cramer gave a lecture in which he made he shared his research into little known factors influencing the rise of Alt.right.

The lecture was a detailed mapping the emergence of a large white supremacist sub-culture. He succeeded in shining a light on the complex origins of the cultist language and image codes that had emerged on the so called message/image boards.

What separates Cramer’s work from that of other reserachers working in a similar area is his
emphasis on the importance of the cultural dimension by taking the role of meme culture seriously.
By showing its emergence and growth on the message/image boards particularly 4Chan and later
8Chan that has succeeded in creating a subteranean groundswell that has to some degree
succeeded in making facism fashionable (or Fashy as alt.right call it).

Cleverly these groups have connected the popular Pepe the Frog meme to both Trump (as Lord of
mis-rule) and to Kek – the Egyptian God of chaos, thereby providing a kind of ocultist glamour to the
movement and further spicing up the noxious brew with additional cultist terminlogy such as
“meme magic”.

All of this would be laughable if it had not been so successful. Moreover there is aparently no equivalent
sub-cultural energy on the left.. where once memes such as the Anonymous V Victory -Guy Fawks,
masks were everywhere, the left has been strangely absent in the meme wars of 2016 , whilst alt.right
has succeeded in transforming the spectacle of protest into the reality of power.

The meme-lab will seek to pragmatically build on Cramer’s research looking for a way forward in
identifying or even contributing to any possible counterbalst to alt.rights current dominannce part of
this challenging the shallow discourse of “fake news” and “post-truth” which only serves to set up
a smoke screen covering the actual dynamics at play.

We will be looking to take any of the meme lab’s outcomes into the “Society of Post-Control”
conference taking place on Sunday 22nd. The lab will also benefit from its proximity the exhibition
-“As If” the Artist as Trickster- taking place at the gallery Framer/Framed also at Toolhuistuin.