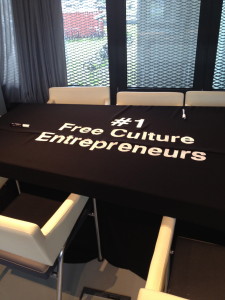 As the dust settles on the radical transformation (read slash and burn) of the cultural landscape of the Netherlands we can begin to see the outline of an experimental framework with some potential. One of the most significant elements of this emerging cultural space became visible with the launch in January 2013 of the New Institute (Het Nieuwe Instituut) and founded on a merger (or forced marriage) of three so called ‘sector institutes’ Netherlands Architecture Institute; Premsela, the Netherlands Institute for Design and Fashion; and Virtueel Platform, the e-culture knowledge institute.

Each of of these individual institutes exist to promote the interests of four distinctive cultural sectors of architecture, design and fashion and so called e-culture and they are now fused into a single ‘new institute’. Based in Rotterdam and housed in a handsome building that was once the exclusive home of the Netherlands Architecture Institute with its world renowned archive, Het Nieuwe Instituut can now be found in Rotterdam’s museum quarter, part of a constellation of masterpieces of modernist architecture.

Free as in Culture

Earlier this month I attended the radical Free Culture event FREE?!. It was hosted by Het Niewe Instituut but initiated by an intruiging combination of organisations. There was Kennisland a kind of knowledge society ‘think tank’ working together with Rotterdam’s Graduate and Post Graduate Art colleges, Willem de Kooning Academy and Piet Zwart Institute whose students participated actively in proceedings. 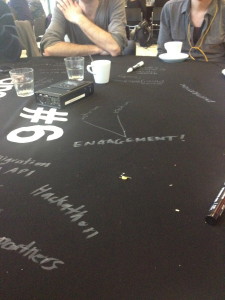 Free?! set out to explore the limits of the concept ‘free culture’ through a series of round tables and performances in conjunction with an exhibition. The boundaries of what constitutes free culture were drawn by the organizers (Eric Kluitenberg and Aymerik Mansoux) to encompass “cultural and expressions that have been deliberately ‘freed’ by their legitimate authors from the limitations that current intellectual property law, such as copyright, impose on them”. The day itself combined an expert meeting in a series of themed round tables and culminating in a late night avant-garde cabaret style public performance exploring the expressive consequences of a genuine free culture movement. 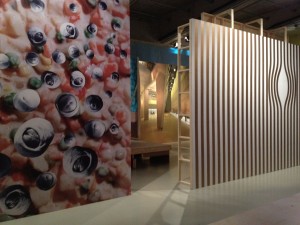 The power of the institutional collaboration was made clear by the juxtoposition of Free!? event with an ambitious exhibition of work by the well known photographic artist Erwin Olaf. The show mounted is as much about Olaf’s collaborator Floris Vos and the show is made up of a series of cunningly interconnected set pieces that direct the viewers gaze through complex and often contradictory spaces and narrations. 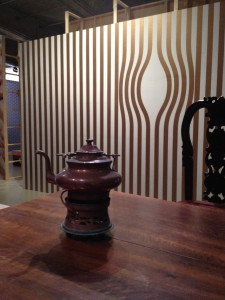