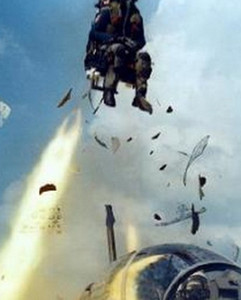 We are currently being invited to revisit the heroic era of Science fact and fiction,
in the classic form of the space opera.

The launch of Christopher Nolan’s sci-fi blockbuster, Intergalactic, gamely
reboots a Kubric like fusion of inner and outer space and coincides with the
extraordinary real-world feat of landing the Philae robot on the comet 67P,
half a billion Km from earth. And as if that weren’t enough, tragedy and
farce combined catastrophically in Branson’s playboy folly, with Virgin
Galactic’s Icarus like fall to earth.

Whatever enormous gulf separate these projects, all three are connected by a
noteworthy thread; the most addictive dream of the old 20th century, the
Concept of Unlimited Possibility.

In 1974 the writer JG Ballard proposed an alternative mode of Science
Fiction, in his introduction to the French edition of his novel Crash. This
still potent manifesto proposes to repudiate the genre’s traditional themes
– of outer space and the far future. Ballard goes on to compare Kubric’s
Space Odyssey to Gone With the Wind as being a watershed moment (in this
case) marking the end of the heroic period of modern science fiction.

In place of -outer space- Ballard favored of a terrain which he christened
“inner space”.. a zone -where the inner world of the mind and the outer
world of reality meet and fuse…” But unlike the surrealists (who Ballard
frequently sites as a key influence) he felt no need to look inwards as his
was the first generation to inhabit the space of total media saturation
which he depicts as the unconscious extruded or externalized into a new kind
of landscape; the media landscape -ruled by fictions of every kind… soft
drink commercials coexist in an overlit realm ruled by advertising and
pseudo-events, science and Pornography-.

Importantly he goes on to identify the key fault-line that is remains highly
relevant and separated him from most of his peers, when he declares that –
Despite McLuhan’s delight in high-speed information mosaics we are still
reminded of Freud’s profound pessimism in Civilization and its Discontents.
Voyeurism, self-disgust, the infantile basis of our dreams and longings –
these diseases of the psyche have now culminated in the most terrifying
casualty of the [20th] century: the death of affect-.

Only Warhol’s chilly and exploitative post-humanism surpasses Ballard’s
forensic examination of the consequences of technology’s collision with
celebrity. A generation later SF writers and technology activists loosely
identifiable as the cyberpunks extrapolated from Gibson’s concept of
Cyberspace. Its possible to see it as a material articulation of the
Ballardian space where the inner world of the mind and the outer world of
reality meet and fuse. But in truth its been a mixed legacy giving rise to a
host of delusional marketing  metaphors, (most recently the Cloud) that
misconstrue the material foundations and thus social and environmental
consequences of the tech industry. Sociologist of networks Manuel Castells
more accurately theorised what occurred, as giving rise to a new kind of
spatiality that was no longer dependent on proximity –he called it -the
space of Flows-.

Among the many gauntlets Ballard threw down two stand out in this manifesto;
the challenge to re-make reality and the challenge to do this from the
position of an artist/ researcher. He talks of how the in a world
characterised by- the blurring and intermingling of identities.. that
preempt of any free or imaginative response it is less and less necessary to
invent the fictional content… The fiction is already there. The artist’s is
to invent the reality.-

Furthermore Ballard proposed that the artist/writer’s authority and license
to act, had changed radically-. Proposing that they adopt the position of
not knowing anything and having no moral stance. He argued that their role
was to simply offering the reader ..a set of options and imaginative
alternatives.- Ballard is rarely a purveyor of plot and character rather he
(through his protagonists) traverse communications landscape adopting the
role of a scientist, -whether on safari or in his laboratory, faced with a
completely unknown terrain or subject.-

Those scientists leaping for joy and the accompanying delirious media prose,
enable us to re-live (if only for a few moments) the dangerous delusion that
we still have limitless alternative futures, a narrative that also dominates
Nolan’s movie Interstellar… Its an ethos Ballard described more than four
decades ago years ago as exhibiting -the social and sexual philosophy of the
ejector seat-.