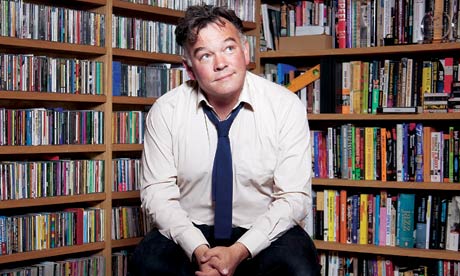 Stuart Lee’s Comedy of the Real

Here’s a novel definition of neo-liberalism:

“A neo-liberal is a man who, if he saw the aurora borealis twinkling over a Scandinavian snowfield would only see a missed opportunity for a public private finance initiative.”

I have stolen this line (and messed it up) from Stuart Lee, the brilliant English stand-up comedian who was actually describing the odious John Whittingdale the current secretary of State for Culture Media and Sport who was appointed by David Cameron to lead the (so called) reforms to the BBC.

Now I am not claiming any connection between this joke and the corporation’s decision to discontinue, Comedy Vehicle, Lee’s television series. Really I’m not…But there is ONE absolute certainty. The justification given for the decision has no basis in logic or fact; the BBC claims the decision was based on wanting to concentrate its resources on -scripted comedy-.  As anyone, with even a passing acquaintance with Stuart Lee’s work will know there is nothing on TV or radio more scripted than Stuart Lee’s routines. Indeed the perception of a gap between the (so called) -real- Stuart Lee and his carefully constructed comedic persona – (an insufferably smug, embittered lefty who just doesn’t know when to shut up)- is the fertile soil where he has long harvested his comedy. And its important for us because It is precisely in this gap between realism and the Real where art becomes political.

I realise that Stuart Lee will not mean much to non-British readers as the targets/subjects of Lee’s stand-up routines are quite local. I suspect his work doesn’t travel that well.. even in England (laughter). but if your interested in a taster try this example of one of his many routines to be found on-line. Just substitute your own local right wing nationalist for Lee’s target: Paul Nuttel of the Ukips.

To explain why Stuart Lee matters- will involve the kind of digression that may seem pretentious to those who think of Stuart Lee as just another stand up comedian. But I make no apology for taking him as seriously as any other artist.

In 2014, the novelist, artist and former co-editor of Mute, Tom McCarthy, wrote an erudite polemic against the current revival of -realism- or -naturalism- in literature. A tendency McCarthy decried as wholly retrograde, declaring early in his essay that it is (quote) – disheartening that such simplistic oppositions are still being put forward half a century after Foucault examined the constructedness of all social knowledge categories or more than a century after Nietzche unmasked truth itself as no more than a mobile army of metaphors, metonymies, anthropomorphisms… a sum of human relations… poetically and rhetorically intensified… illusions of which we have forgotten they ARE illusions. (end quote)

Crucially McCarthy’s line of argument rests on establishing a clear boundary between the Real and realism (sometimes called naturalism)… And he goes on to explore this idea in depth with particular attention to its relationship with violence through various literary examples.

From the point of view of the comedic practice of Stuart Lee, one of the best of McCarthy’s examples is that taken from the surrealist, poet and Antropologist, Michel Leiris’s book ‘Literature Considered as a Bullfight’ in which Leiris compares the writer to a toreador. (quote) Imagine a bullfight without a bull: it would be a set of artistic manoeuvres, pretty twirls and pirouettes and so on – but there’d be no danger. The bull, crucially, brings danger to the party, and for Leiris that’s what the real is: the tip of the bulls horn. (End quote).

Reading this again I am left wondering just where is the real jeopardy (sharp tip of the bulls horns) in the writing of a novel ? In stand-up comedy the same question is less difficult to answer. The hazard can be found in the nightly encounter with and moment-to-moment responses of the audience, where dying (the jargon in stand-up for -losing the room-) is an ever present danger. But most stand-ups are in flight from this hazard, but for Stuart Lee (and his fellow alternative and post-alternative heroes) this danger is the whole -point of the exercise-. And the game is to come as close as they can without being gored? The clue is in the subtitle of his biography How I Escaped my Certain Fate,  -the Life and -Deaths- of a Stand up Comedian.

The key moment enroute to this destination is beautifully described in his when he writes about preparing a piece on the hysterical public reaction to the Death of Princess Diana, where he (quote) began to stretch the silences, the lack of laughs, the tension, to the point where I’d be worried about ever winning back the room.. There’s always a clear end in sight and lots of little hand rails to grab on to in the midst of uncertainty, but at the time it felt like a nightly leap into the void, acting out the grief of the people in the story to the silent onlookers. Today I’d go much further away from the shallow end. (End of quote)

The reason it makes sense to talk about Stuart Lee’s work in relationship to the tension between realism and the Real, is that he is always at pains to insist, unlike many mainstream stand up comedians, that he is not being himself on stage. His comedic persona is a construct, a highly scripted fiction. In his many lectures and writings he sites frequent examples of taking angry or upset members of the audience who come up to him after the show, to one-side to explain that what they see on stage is a deliberate artefact, created for comedic and polemical effect.

But maybe he is being a little disingenuous for at the heart of his work is an insistent ambiguity. The whole illusion of -stand up-is based on the fact that comedians do not present themselves as actors. The work depends on the audience believing that the performers –are being themselves- unscripted they extemporise uninhibited flows of what WE would say, if only we were as daring, foolish, reckless or brilliant as they are. It is the ambiguities around this -me but not me- schtick, where Stuart Lee deconstructs realism without ever quite abandoning it.

Just how far he takes the ambiguity can be found in one of the most revealing of his many footnotes: that elaborates on the position of his stage persona that has given one of his many violent verbal bashings to a fellow comic and frequent whipping boy Ben Elton. In the foot note Lee describes how “I am sort of in character as a smug, stuck up, politically correct, holier than though leftie, a character I have researched so fully I often feel obliged to behave like it in my own spare time, sometimes for years on end.”

Although I don’t believe any of the reasons the BBC has given for getting rid of Lee’s series, I do confess that I am not surprised that the series was discontinued. I suspect that the actual reason is that watching this performance has become less and less easy to bear as he takes us closer and closer to the edge (Human kind cannot bear very much reality). Perhaps its even hard for some of his fans.

The work has become less of a journey and more of a predicament as his construct of the embittered and angry man whose audience -just doesn’t get it-.. becomes so raw, so persuasive as to be (even on TV) more of an ordeal, with his scripted outbursts off fury with the audience who still just doesn’t get it.

Back to McCarthy’s essay ….”Think about it.. if the matador is gored, the bullfight, the entire spectacle, suddenly comes to appalled halt; what the bulls horns brings to the party is not just danger but the possibility that the party itself could be catastrophically interrupted.. and if the bulls horn is a vision of the real, then what the real represents is an event, something that would involve a violent rupture of the form and procedure of the work itself.”

This is why Zizek’s (in his essay on the post September 11 wars: Welcome to the Desert of the Real) claims that “The ultimate and defining moment of the 20th century was the direct experience of the Real as opposed to every day social reality – the Real in its extreme violence as the price to be paid for peeling off the deceptive layers of reality.” And it is this passion for the Real espescially when in a dialectical relationship to realism that continues to animate the most daring and original projects in 21st century art, theory and (in Stuart Lee’s) case comedy.