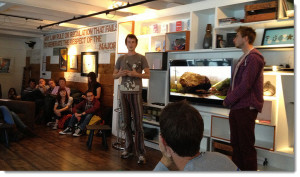 The Dream Factory: from Transition to Transformation

The Dream Factory www.thedreamfactory.net is developing new models of collaboration to support individuals and companies at key points of transition. Based in the centre of Brighton’s creative hub, Dream Factory is made up of an interdisciplinary network of experts including artists, researchers, social-web designers and coaches have developed a blueprint for collaborative practice suited to the new ‘superfused’ economy.

Brighton itself is in transition into one of the major creative hot-spots outside the capital and Dream Factory’s agenda is consciously connected to this wider economic and social process. These are not mere assertions Brighton’s radical transition into a creative economy is supported by evidence drawn from Brighton Fuse, a ground breaking AHRC research project whose evidence points to the emergence of a distinctive creative sector enjoying levels of growth that outstrip general UK growth rates by an order of magnitude.

This growth is based on advanced forms of production which the research report describes as ‘superfused.’ The concept of ‘superfusion’ goes beyond simple traditional mashups of disciplines and sectors. It is refers to very “spescific forms of collaboration that combine art, technology and communications/marketing with particular emphasis on social media, and developing simultaneous real-time relationships between these platforms”. Our growth as individuals and organisations depend on connecting to the superfused model but rather than simply accepting the current corporate direction of travel as the only possible model. In response we are developing Dream Factory ‘gateways’ to guide superfused practices in a civic direction widening access to ensure advanced practices are not restricted to a narrow sector of society.

The research shows that much of Brighton’s recent growth is being driven entrepreneurs who have relocated to Brighton form elsewhere. They are drawn to the city by a combination of life style, proximity to London and an increasingly rich pool of local talent. Although lifestyle is one of the keys to Brighton’s appeal the city is yet to become a trully interdisciplinary melting pot as there is a tendency for similar disciplines and sectors to cluster together in silos. The Dream Factory offers a supportive environment in which individuals and teams at key points of professional or personal transition can be connected to one another in ways that break with familiar loops and turn points of transition into opportunities for transformation.