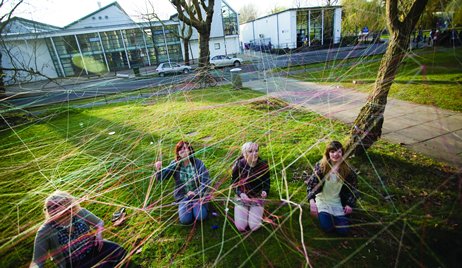 One of the unintended consequences of the grand experiment incorporating colleges of art and design into universities, were the different kinds of opportunities and pressures on academic staff who suddenly found themselves part of Russell Group Universities. In this interview with two leading researchers at Winchester College of Art, Ryan Bishop, Professor of Global Arts and Politics at the University and Co-Director of the Winchester Centre for Global Futures in Art Design and Media and John Armitage Professor of Media Arts, we explore this and other questions in the context of their ambitious project to build a rich research culture with a media arts inflection through innovation at an institutional level. This includes the development of a powerful new Centre for Global Futures in Art Design.

David Garcia: Lets start by asking you what you see as the main issues facing you in seeking to embed a research culture in a traditional art College?

John Armitage: We should begin by saying that there are very few art schools that, as we are, are part of Russell Group Universities. That matters for two main

DG. So given the importance of the influence of continental philosophy as well as cultural and media studies on much contemporary art are you suggesting that the availability of scholars who take these questions seriously in the new universities provides advantages?

JA. It is only comparatively recently that Russell Group Universities would dain to dabble in areas like media studies. But actually it is even more complex in that there are variable histories shaping what is possible; for example film studies are acceptable in some Russell Group Universities. It depends on where the study originates, there are for example a number of film studies that have grown out of English literature or language departments as in the French department in Newcastle which then gave that rise to the development of film studies in that University. But despite this for years Newcastle wouldn’t touch media studies for years. I know about this because I was at University of Northumbria.

Ryan Bishop: This is analogous to other innovative areas such as women’s studies, cultural studies those areas which are

explicitly interdisciplinary often with a political agenda that were much more acceptable at new universities than they were at the Russell group Universities. And this gives rise to frequently overlooked questions such as what gets defined as research and by whom? And our challenge here is keeping these kinds of questions at the forefront, as we are part of a Russell Group University.

But make no mistake we consider that as an advantage as our PhD students are able to study alongside world-class scholars, in an array of different fields and so have the opportunity to demonstrate what art can bring to bare on other kinds of research.

So there is a discussion taking place at University management level of what kind of thing create research in the arts. And we as a research centre feel a pressure to generate research that they recognize as research even if they don’t necessarily agree with it.

RB. I am agreement with this. And one of the things I want to introduce as Director of Doctoral Research here is to challenge practitioners to think about getting away from the somewhat pernicious interpretation of the action research model which reinforces the idea that as long as you reflect on what you are doing in any way that you wish that you are conducting research and often this amounts to little more than the written component being little more than a practice run for an art forum interview and serves and legitimizes and feeds the solitary genius model that we would like to challenge. This is why we are challenging the practitioners entering this process to be able to produce the textual part of their research to be something that researchers in the other university departments would recognize as research.

JA: This issue is sector wide. One of the issues I have always faced is persuading artists and filmmakers that what they do is research. I have to support them in recognizing that the processes of inquiry that are the normal part of art and design is actually research. There are ways and means of doing what you want by re-framing it. Often the word research is intimidating to artists, which they think is something other than what they are actually doing.

DG: Given the emphasis on “media arts” media archeology is this emphasis also influencing the selection of Doctoral students? Is this media cultures dimension reflected in the student and staff at BA and MA levels? On the basis that for a doctoral program to work the research culture being promulgated would need to have a presence at all levels of the institution. So that students at all levels could envisage a Doctoral possibility for themselves.

RB: I would say these questions are being addressed with a number of distinctive initiatives on different levels. There is the particular character of the program of talks at the new Centre for Global Art Futures in Art and Design, there are a series of external partnerships, we have instituted a PhD seminar process and less formally we have individual staff mentoring. The program of talks at the Center with its own flavor. Not only are we bringing well-known people to Winchester, putting it on the map, we are also, just as importantly, working with staff to present their own research rather than only focusing on bringing stars from outside.

DG: So the research center acts as both a source of inspiration to the wider community and the context group who are seeking to create a distinctive research culture.

JA: Yes the obvious area is that of Cultural Politics and its connection to media people such as Ryan, myself, Jussi Parikka and Sunil Manghani and also through shared projects such as the partnership project we are developing with Transmediale [Transmediale is a leading Berlin based Media Arts Festival and year round project that draws out connections between art, culture and technology] This is all part of building a research culture from the ground up and simultaneously underpinning it with journal activities such as the work we are doing with the Third Text and now, most significantly, a new book series “Technicities”, to be published by Edinburgh University Press and edited by ourselves here at Winchester. Finally within the university of Southampton we are in discussion with the department of politics about the possibility of am MA in cultural politics that would be jointly taught.

RB: We are committed to creating a space for our staff to see themselves within this space and see themselves as part of the process of building a research cultures. And so given the nature of the college part of our agenda must be to break down the distinction between theory and practice. For example a particular innovation will involve in recruiting MFA students who just comes to write and they will engage with the students who are working in a more traditional MFA setting.

JA: One of the challenges I have always faced, and I think this is sector wide, is persuading artists and filmmakers that what they do is research. We have to support them in recognizing that the processes of inquiry that are the normal part of art and design is actually a research process. There are ways and means of doing what you want by re-framing it. Often the word research is intimidating to artists, which they think is something other than what they are actually doing.

DG: Can you say a little more about what you are calling the PhD seminar?

These are the aspects we want to do more of but it’s a slow process. It takes time. In the end the University is always (to borrow Kant’s phrase) a conflict of faculties and it always in the act of revisiong and re-envisioning what it is and what it does. And yet it is one of the three institutions in the West that has survived since the Middle Ages, the other two being the Military and the Church. They are organized in similar ways they have some degree of shared cultural capital or cache. Although I would say that the University I currently under threat. That is in a way more profound than it has been in the last 100 years.

DG: Are you referring to the introduction of fees?

RB: No not just fees. I mean the perception of the value of the institution given the ease of access to information and knowledge on line. Maybe people are saying that the University degree doesn’t have the same kind of imprimatur. People still want to come but we are in the process of re-thinking the way in which it operates.

DG: Ok but what about the art school that has a significant and distinctive history in its own right?

RB Yes that’s the thing as John said at the very beginning the art school independent of the rest of the University is a very different animal from the art school once it has become part of a university. And we are still unclear of the fault lines and ruptures that open out of the introduction of PhDs alongside studio based work and traditional forms of practice. Increasingly we are forced to ask ourselves what does that do to art school and what does it do to universities that almost all art schools have become attached to? And is this new institutional space, a space where we can think of as a space for experimentation in the same way as we can think of experimentation within laboratories.