Is Another Europe Possible?

Varoufakis, the former Greek Finance minister and radical leader of DiEM25 a grass roots movement to democratise the EU, urged progressive members of the Remain campaign,  to confront the complete “failure of progressive forces to harness the anti-establishment rage”. 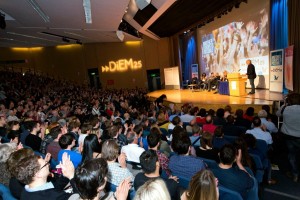 And its true, from the outset, we struggled to find a voice that resonated beyond our own echo chambers. Complex nuanced arguments never crystallised into potent rhetoric or cogent images. The language was too technocratic, sounding like so many unwanted memos from the -expertocracy- Nothing in our rhetorical armoury could match Take Back Control or – Our Independence Day-. The challenge across Europe will be to better understand the appeal of these slogans do we stand a chance of matching it. Serious hard thinking must be matched by communications that can function in the -social media vortex-.