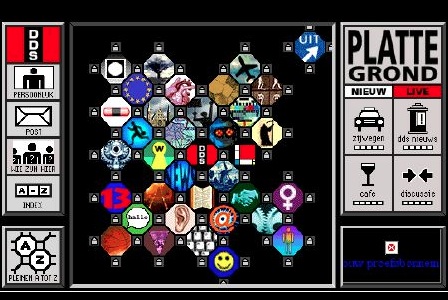 Happy Birthday Amsterdam Digital City..”it was 20 years ago today”.. This week there are anniversary celebrations for Amsterdam’s Digital City. Where the screen design alone captures that dream-like moment when some imagined they would leave the material world (known at the time as “meat space”) and set up residence in a parallel universe of sharing and freedom called cyberspace. The shift from that era to the present day was summed up recently by Geert Lovink when he recently declaimed “once the internet changed the world; now the world is changing the internet”…

The interface design by Marjolein Ruyg (who along with Mieke Gerritzen) gave Dutch cyber culture its distinctive look and feel in the 90s still looks vibrant. A weird and timely mix of cyber psychedelia and austere Dutch constructivism it shouldn’t work but it captures the zeitgeist of the European alternative to the “Californian ideology”.

And for a real blast from the past pioneer media pirate Menno Grootveld.