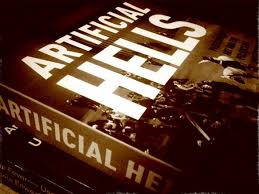 As that most straightforward of publishing devices, the mailing list, also turns out to be one of the most resilient of the collaborative media forms to have emerged from the internet revolution, it makes sense for nettimers to get acquainted with the writings of the critic Claire Bishop, particularly those of us interested in the fate of the arts in the age of networks

As that most straightforward of publishing platforms, the mailing list, also turns out to be one of the most resilient of the collaborative media forms to have emerged from the internet revolution, it makes sense for nettimers to get acquainted with the writings of the critic Claire Bishop, particularly those of us interested in the fate of the arts in the age of networks.

For anyone who has missed out on Bishop’s writings, she has in recent years, established a reputation as one of the most influential advocates of what has been called –the social turn in art- a movement that began in the 1990s that effectively shifted art’s centre of gravity towards the social and the political. Taking these practices from the margins of what used to be called -community arts- to become a prominent genre of the international mainstream.

For Bishop it is above all the participatory aesthetic (and the accompanying issues around politics of spectatorship) that represent the key dynamic (and problematic) of the “social turn” in art. The revival (for that’s what it is) of a participatory emphasis in art, emerged, in a dialectical relationship, to the mass popularisation of the internet in the 1990s.

Given this historical proximity it is quite strange that Bishop has managed to write her entire magnum opus, Artificial Hells, without once mentioning the internet. This is a significant though dubious achievement and exploring this fact may take us a little closer to understanding the failure of the mainsteam art world to come to terms with the post war cybernetic paradigm and why the media arts have been unable to become more of a force to be reckoned with in this territory.

I want to argue that a certain historical amnesia has contributed to Bishop’s professional success. She has ability to combine both highly evolved scholarship and insight with moments of strategic omission and that enable her to appear radical without ever fundamentally challenging the art world’s status quo. She is as interesting for what she leaves out as what she includes.

Despite my strong reservations about some aspects of Bishop’s work, it is important to begin by acknowledging her considerable achievements. Bishop’s critical reflections over a number of years culminated in 2012 with her major work, “Artificial Hells”, the title is taken from -Breton’s post mortum of the DaDa Spring in which he argues for the exquisite potential of social disruption in the public sphere.

The book is laid out as a set of interconnected explorations of key historical threads and moments that led to the re-emergence of the participatory turn in art. Her breadth of scholarship reveal this impulse to be a recurring strand of the 20th century utopian avant garde. Importantly her work is enlivened by an intellectual confidence enabling her to make bold assertions based on substantive arguments that go beyond the descriptive. In otherwords there is plenty to agree or disagee with. In art criticism that is a rare and valuable attribute.

One of her most important contributions has been to foreground the theater as a principal historical progenitor of the participatory aesthetic. This is important as most of the available histories of this kind of work have over emphasized the visual arts at theaters expense; even when discussing the performative.

But her most urgent polemical mission has been to mount a stiff defense of the aesthetic and the role of the spectator. Bishop throws down the gauntlet to those who argue that the aesthetic judgement (and by inference the function of the critic) are an irrelevance to work which seeks to dispense with the role of spectator.

The defense is necessitated by the widely held assumption that, in this field,  aesthetic judgments are by definition reactionary, and, that it is only possible to judge this kind of work from the standpoint of the active participant. In this context aesthetic judgments are seen as outmoded forms of connoisseurship or put more simply; elitist .  The principal weapon in Bishop’s armory in attacking this position is of course Rancière. Particularly his alternative to the work of art as autonomous. Instead emphasizing our (the spectator’s) autonomy. The autonomy which we as spectators experience in relation to art. Thus at a stroke he undermines the simplistic dichotomy of passive spectator vs active participant. For Ranciere the key lies in the undecidability of the aesthetic experience which -implies a questioning of how the world is organised, and therefore the possibility of changing or redistributing that same world-.

Genuine participation, as Ranciere declared in the Uses of Democracy, requires the invention of the unpredictable subject who momentarily occupies the street, the factory, the museum, rather than fixed space of allocated participation…This approach depends on accommodating the role of the spectator and rejecting the notion that, by definition, spectators lack agency. They have interpretive agency and that matters. – Nettimers take note: I lurk therefore I am – lurkers of the world unite.

So what’s the Problem

For all its value Bishop’s work is too often tempted by the sin of -subversive compliance- meaning the kind of political art (and criticism) that capitalises on looking edgy by continually threatening to -bite the hand that feeds it – but without ever actually intending to draw-blood. And Bishop’s preferred method for enacting subversive compliance is the strategic exclusion.

About a year after the publication of Artificial Hells 2013 she wrote a widely circulated essay in Art Forum in which she develops her proposition – (Quote) that the content of contemporary art has been curiously unresponsive to the total upheaval in our labor and leisure inaugurated by the digital revolution”. Bishop proceeds to note – that there is, of course, an entire sphere of “new media” art, but this is a specialized field of its own: It rarely overlaps with the mainstream art world (commercial galleries, the Turner Prize, national pavilions at Venice). While this split is itself undoubtedly symptomatic, the main- stream art world and its response to the digital are the focus of this essay. – End of Quote Art Forum

So because it doesn’t sit in the -Oh so important mainstream art world- she will not be considering it beyond noting that it exists. Thus she identifies a key problem, then identifies those artists and events where the problem is being addressed but then declares she will ignore them because what is happening in the mainstream art world is of course far more important. (Strategic Exclusion) Sadly this approach implicates Bishop as part of, the problem she is describing. To paraphrase Walter Benjamin -we should not look beyond the critic’s declared sympathies, but at the position that the work occupies in the production relations of its time.-

Returning to the more important case of Artificial Hells, too often Bishop’s defense of the aesthetic is elided with a defense of the art world as the primary territory where the aesthetic is happens (through being endorced or legitimised). At one point Bishop asserts (Qute) that -it is crucial to discuss, analyse and compare this work critically as art, (for emphasis she puts -as art- in italics) -since –she asserts- this is the institutional field in which it is endorsed and disseminated-(end quote)

I would argue that the most inventive of contemporary artist/activists (perhaps beginning with the AIDS activists of ACTUP) utilise contemporary art’s language of tactical undecidability to be both a trigger and an invitation to discourse whilst dispensing with the legitimizing paraphernalia of the mainstream art world with its hierarchical equivalents of Popes, cardinals, saints and sinners. Contemporary mediatised activist/art at its best does not tell us what to think, in the manner of traditional propaganda: instead it is an invitation to discourse. It does not require, (in Bishop’s words) the institutional field as a means of endorsement and dissemination.

Perhaps this is why early in the introduction of Artificial Hells, Bishop cleverly put in place a framework of strategic exclusion that distorts the radical potentiality of the –social turn- Her momentous feat of omitting the internet from the book, does not appear ridiculous because from the outset , she declares that she will not be addressing; “transdisciplinary, research-based, activist or interventionist art”. Why on earth Not?! Because according to Bishop “these projects do not primarily involve people as the medium or material of the work”. She goes on to claim that they are also excluded “because they have their own set of discursive problems that I would like to address in the future”. Four years after the book’s publication and I am still waiting for her to identify and address these “discursive problems”.

I would argue that it is precisely the areas she has excluded the -transdisciplinary, research-based, activist or interventionist art-… that offer the most radical and far reaching contribution to the social turn in culture. Indeed it is precisely this constellation that suggest a partial definition of tactical media, and as a whole the saga suggests why a new term was required that retained an aesthetic dimension whilst dispensing with much of the onerous historical baggage.